“She is the most beautiful among women who loves the Guru and wears this jewel on her forehead.”

Mai Bhago ji, mother Bhago ji, was a descendent of Pero Shah, a Muslim Dhillon Jatt who had converted during the time of Guru Arjan. Born in a village known as Jhabal, Mai Bhago ji was married to Nidhan Singh Varaich. She is known for persuading the Sikhs – that deserted Guru Gobind Singh ji in difficult times – to apologize for their action.

Mughals and hill chiefs had surrounded Anandpur, and were demanding it be evacuated. They announced that any Sikh who would say that “he/she is not a Sikh of Guru Gobind anymore” will be left untouched, while others will be done to death. 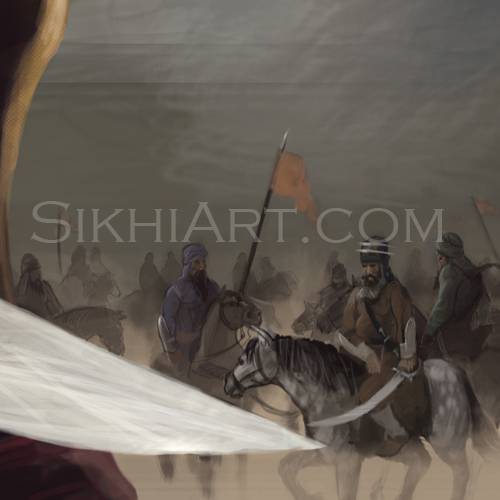 A group of forty Sikhs, led by Mahan Singh Brar told Guru Gobind Singh that they were no longer his Sikhs. Guru Sahib asked them to put this in a document and sign it. They all did so, and left Anandpur.

Guru Gobind Singh ji, who had to evacuate the fort of Anandpur, was now being pursued by the Mughal army. Guru Sahib’s youngest sons got lost in the confusion, and his eldest sons attained martyrdom in Chamkaur, where he had found temporary shelter.

Guru Sahib then evacuated Chamkaur, and travelled in the Malwa region with several Khalsas. He reached the village of Khidrana, where he met up with Mai Bhago ji and the forty Sikhs. Together, they challenged the pursuing Mughal army, and fought furiously, forcing it to retreat.

All forty Sikhs attained martyrdom in this pitched. Mahan Singh, who was fatally injured, died, as the Guru took him into his lap. Guru Gobind Singh then blessed those forty dead as the Forty Liberated Ones, Chali Mukte. He took into his care Mai Bhago ji, who had also suffered injury in the battle. She, thereafter, stayed with Guru Gobind Singh ji as one of his bodyguards.

After the death of Guru Gobind Singh ji at Nanded in 1708, Mai Bhago ji retired further south. She settled down at Jinvara, 11 km from Bidar in Karnataka where, immersed in meditation, she lived to attain a ripe old age.

Details of the painting
Mata Bhago ji always reminds me to take an active role in moving myself and those around me, towards the Gurus’ way, towards meditation, social work and martial arts, and she reminds me to be the leader of change and to avoid waiting around for change to “just happen”.

Processing…
Success! You're on the list.
Whoops! There was an error and we couldn't process your subscription. Please reload the page and try again.

We ship world-wide without delays! Dismiss